Last Sunday, I was joined by the internationally-renowned scientist, philosopher and visionary, Ervin Laszlo for a public conversation we titled “The Self-Actualizing Cosmos: The Akasha Revolution in Science and Human Consciousness.” 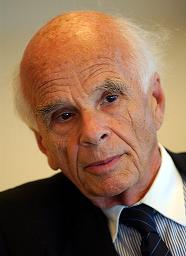 The conversation ranged quite widely, and some of what he had to say even startled me.

I wasn’t surprised when he began by describing his synthesis of the radical holographic implications of the new physics, a paradigm for which he borrows the Sanskrit term “Akasha” to refer to the quantum vacuum, or originating field that is more fundamental even than matter and energy.

He described a new paradigm “that says there is no such thing as empty space, it’s more like what Buddhists speak about—a still, space that is empty but contains everything.”

Ervin says that the cosmic field is a plenum and not a vacuum. And that plenum is the code of how the universe plays out. The blueprint exists, beyond the superficial elements that we perceive. Down deeper, we find that we are part of a deeper reality where all things coexist and co-evolve.

Ervin pointed out that if you ask a quantum scientist “What is the basis of all this? What is matter?” He’ll say…there is no such thing as matter! What you have is energy, based on information moving. David Bohm talked about how the world that you observe is being in-formed. It’s fundamentally information. Instead of bits of matter rushing about, you have a total field that has no gaps, no places where it isn’t present. All information is given at the same time.

Ervin described how the new concept that is arising now in quantum cosmology/field theory is that of a holographic universe. Spacetime is holographic. In a hologram, all of the information that produces the image is present at every tiny point—you can take a holographic film and illuminate any small part of it, and you’ll find that the total image emerges. The “software” of the universe is present in every bit of it.

“You don’t see the quanta,” he explained.”You see the effects. Like with an electromagnetic field—you don’t see the field itself, you see its effect. The universe is basically an unobserved wholeness of which the observed elements are those that meet the 5 senses. We try to understand the whole, but we’re working by inference.”

It’s a profound, liberating, and radically holistic vision of the nature of our reality and our existence. But I had anticipated that.

And I had expected to challenge him, to ask him why he spoke so consistently of “consciousness” but not of “God” or “spirituality” even though the implications of his vision of reality are, in most people’s view, profoundly spiritual. But what was startling to me, was that I didn’t need to challenge him at all! He went straight to the spiritual aspect on his own.

He said what he’s talking about is really not any different from the classical spiritual notions. Plato pointed to this way of understanding reality in the allegory of the cave. Most people believe the shadows are real, but the real world is actually behind them. They have to turn around, to get “enlightened” to be able to see the real world.

Also he freely associated his notion of Akasha, the deepest dimension from which all manifest reality arises with ancient mystical concepts dating back 5000 years or more. He cited Pythagoras and Plotinus, drawing parallels with this view of reality which expresses an ancient notion. The world is not what you see—what you see is the effect of unseen realities that are the real nature of the world.

However, this ancient concept seems revolutionary now, because it’s linked to new scientific data, and thus represents a new paradigm, rooted in ancient understandings, that’s in the process of replacing the current dominant paradigm.

The conversation ranged quite widely, with a particularly interesting description by Ervin into his own practice of using intuition, of tapping into this “Akashic information field” as an aspect of his daily life. He said that he’s always been guided by intuition, and the idea that what he can perceive is only a fleeting image. Underneath is something more profound and real.

He also testified to his own “inverse optimism.” He said that he’s very optimistic in terms of human potential, but quite pessimistic in terms of the current holding pattern of the dominant paradigm. He thinks the break is about to come and that we had better be prepared for it.

But when I asked him what he meant about being prepared, he explained that he wasn’t pointing to storing food and water and guns. He talked about discovering a more healthy way to be before this break. He talked about opening ourselves up to a source of wisdom in the cosmos that can enable us to feel what is needed.

I pressed him further, and he immediately used the “L-word”.

Ervin said, “Love is the connection that we feel to others. Community. Nature. Humanity. Our connection to the cosmos itself. We know this directly whenever we can feel belonging-ness, in a Win/Win way, wherever I can recognize the deep truth that I am the other. This expresses the concept from contemporary physics of “entanglement”, which is a quantum phenomenon. All atoms, all cells are connected, deeply.”

Love, according to Ervin, is at its root recognition, knowing that we are one. It is a spiritual concept that is backed by the latest insights into how systems operate and evolve. The biosphere is such a complex system, with so many physical and non-physical dimensions—emotional, conscious, subconscious elements feelings, rationality, etc. The ultimate element is this sense of my belonging to you and to us. There is no singular sense where we can talk about evolution as if we operated on our own, independently. There is only coevolution, co-development. We and Us—that’s the source of the greatest hope we have.

The new paradigm recognizes that we are all part of one system. With higher consciousness we find ourselves more at home, and we find better and better solutions to our problems, large and small. But the old conception of world is still pervasive. We see it all around us. And it is pushing back. What price will we have to pay to transform?

Our best bet is just to transform ourselves and act according to this new paradigm, of information, of entanglement, expressed by love and oneness.

Ultimately Ervin expressed tremendous confidence, “If you can act like that [from Love] the world will be saved from ultimate collapse.”

There was much more, so I hope you will tune in to listen to this illuminating, powerful dialogue. Tip: Because he was calling in from Italy, Ervin’s voice is a bit faint; if you use earbuds or headphones, you should be able to hear him clearly. You can download the recording here.