On Sunday, Marianne Williamson joined me for “The Spiritual IS Political—Why I’m Running for Congress”. Wow! She certainly made it clear why she’s a force to be reckoned with.

Marianne stands strong as a luminous committed citizen of the USA and the world. She does so in a way that doesn’t just convey her deep care and intelligence, but also her fierce and formidable stand for change. Our politics are not just corrupt, but pathological. And the responsibility to change that lies with each one of us.

She may be our most eloquent, inspiring and incandescent voice for spiritually-informed political engagement. She says, “politics shouldn’t be the least heart-filled thing we do, it should be the most heart-filled thing we do, a collective expression of our most enlightened selves” and she’s making her candidacy an invitation to us all to express our inner work by engaging the outer work of the mainstream political process.

To honor the seriousness of her candidacy, I raised some of the objections and tough questions that arise among spiritual progressives, and gave her a chance to persuade us all that she is the candidate right now who can catalyze a transformational shift in U.S. political praxis.

Well, she rocked. Most of us were, shall I say, convinced. It became obvious that Marianne is more than “ready for prime time”. She inspired all of us who were there live. Several listeners pledged generous donations, and a fellow from New York, inspired by the joy that has come into his life after volunteering to serve after Hurricane Sandy, decided, right there during the call, to move to Los Angeles to help with her campaign! Even I was moved to offer an official endorsement.

I asked a lot of hard questions. And she answered them well. Really, you’ve got to hear the interview . Now, I’m writing to let you know about it and to share several invitations

1.   Download (FREE) and listen to the MP3 of our conversation

2.   Donate  Marianne said that if everyone who wants to see spiritual values enter our politics would donate just $5, her candidacy would be funded

3.  Tell your friends about her candidacy (by forwarding this email, for example) and sending them to www.marianneforcongress.com.

And if you’re inspired, especially if you live in the L.A. area, you can even volunteer.

An exciting story is just beginning to unfold; it’s well worth tuning in! 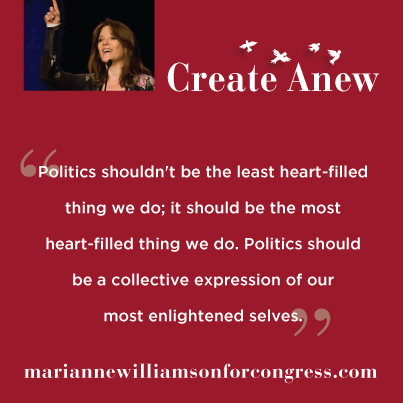